What are the things to do in Bangkok, Thailand? Bangkok is one of the world's most exciting cities to visit. The city provides something exciting for everyone with such diversity of distinct attractions and a intriguing combination of traditional fused with contemporary culture. With more than 10 million inhabitants, Bangkok is very large city and it would take a life time to fully explore it.

We've placed together a variety of options that consist of everything from Bangkok's open and covered markets, its most revered temples and gilded palaces, to the city's so renowned culinary choices. 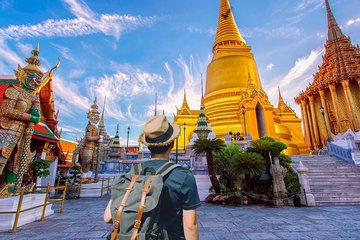 Chatuchak Market in Bangkok has grown to become the world's largest weekend market, with over 200,000 visitors per weekend. The Market features over 15,000 vendors spread out over 35 acres, divided into 26 sectors ranging from food to art to antiques to fashion and much more! 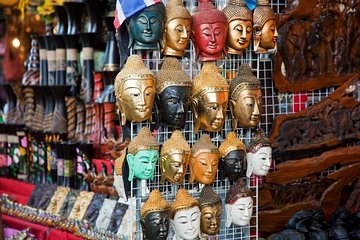 3. Khlong Toei Market ตลาดคลองเตย - The most vital fresh food market in Bangkok. Many people consider Khlong Toei Market, which is located near the popular expat neighborhood of Thanon Sukhumvit, to be one of Bangkok's "must-visit" marketplaces for fresh food enthusiasts. In fact, the majority of the food given to you during your stay in Bangkok was most likely purchased here. 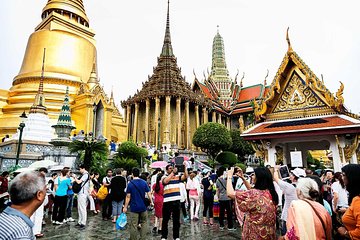 5. Pratunam Market ประตูน้ำ - Shopping is a huge Bangkok attraction and Pratunam is one of the wholesale outdoor markets. While it cannot compete with Bangkok's huge malls or marketplaces, Pratunam Market has a particular allure that appears to be fueled by one factor: the absence of foreigners. Markets don't get much more local than this — so local, in fact, that as you weave in and out of the market's many metal-encased stalls, you might get a few puzzled looks.

6. MBK Center มาบุญครอง - One of the most hectic shopping malls is MBK, everything imaginable under one roof. Mahboonkrong, or MBK Center, is a big shopping mall in Bangkok, Thailand. The mall, which spans eight stories and includes the four-story Tokyu department store, houses over 2,000 stores, restaurants, and service outlets. The MBK Center boasts daily visitor counts of more than 100,000, with half of them being young Thais and a third being foreigners.

7. Or Tor Kor Market ตลาด อ.ต.ก. - Visiting markets is one of people's personal favorites activities in Bangkok, and Or Tor Kor is amazing. Or Tor Kor Market is an indoor market located in the building of Marketing Organization for Farmers (MOF) opposite to Chatuchak Weekend Market. The area of the market is 6,500 sq.m with more than 600 stalls selling their goods here. 8. Lumpini Park สวนลุมพินี - The central park of Bangkok. Lumpini Park (also known as Lumphini Park) is one of Bangkok's largest green spaces. This inner-city park, which was established in the 1920s and covers over 500,000 square meters, is home to a variety of vegetation and fauna. It's become a favorite gathering location for Bangkok locals throughout the years, who would assemble for a day of running, mild workouts, aerobics, and relaxing activities. 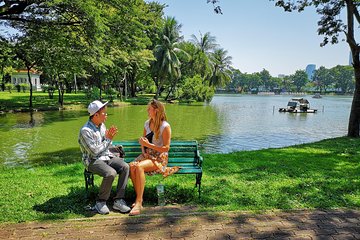 9. Bangkok National Museum. Thailand's largest collection of local art and relics is on display in the Bangkok National Museum. The museum, which was founded by King Rama V, is housed in the former 18th-century Wang Na Palace in Phra Nakhon. Wat Phra Kaew and The Grand Palace are both within walking distance, so you can easily combine a day trip to both while in Bangkok. 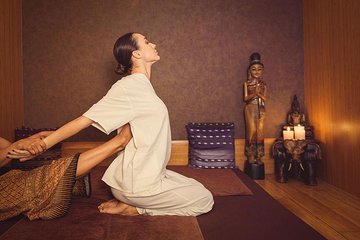 11. Grand Palace, Wat Phra Kaew วัดพระเก้า - The most revered of all attractions in Bangkok. The brilliant, majestic Grand Palace is without a doubt Bangkok's most recognized monument. It's a must-see attraction that no trip to the city is complete without seeing. It was built in 1782 and served as the Thai King's residence, the Royal Court, and the administrative seat of government for 150 years. 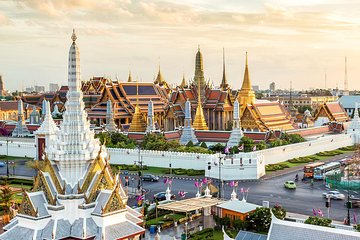 12. Wat Pho วัดโพธิ์ - Home of the reclining Buddha. Wat Pho is known for more than its colossal reclining Buddha and traditional Thai massage. This landmark temple houses a unique collection of murals, inscriptions, and sculptures that cover a wide range of topics, including battle, astronomy, and archaeology. A beautiful garden with stone sculptures, stupas embellished with glazed porcelain, a gift shop, and the College of Traditional Medicine are all part of the large temple complex. 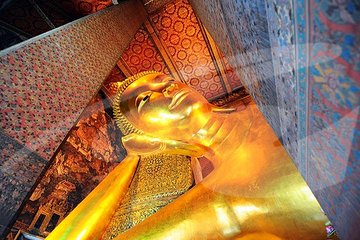 13. Wat Arun วัดอรุณ - Wat Arun is the temple of dawn, located on the the Chao Phraya River. The stupa, which features ornate floral patterns and is decked out in glazed porcelain, was built in the first half of the 19th century in the ancient Khmer style. It's particularly beautiful up close. Aside from its aesthetic value, Wat Arun represents the beginning of the Rattanakosin Period and the establishment of the new capital following the fall of Ayutthaya. 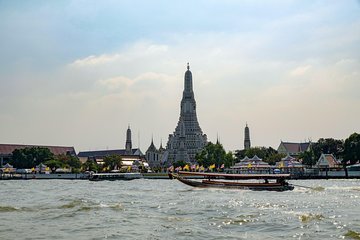 14. Wat Saket (วัดสระเกศ) - Bangkok's Golden Mountain Temple with great views. Wat Saket In Bangkok's Old Town, there is an Ayutthaya-era shrine with a shining gold chedi. It's also known as the Golden Mount, and it's an 80-meter-high man-made hill that was created during King Rama III's reign. The temple is open all year, although it is busiest during its annual temple market in November, which coincides with Loy Krathong. There are mature trees on the temple grounds, as well as traditional Buddhist structures such as a main prayer hall, ordination hall, and library.

15. Erawan Museum ช้างสามเศียร - A giant three headed elephant which is a temple and museum. The three levels of the Erawan Museum in Bangkok represent the underworld, human earth, and heaven. Rare eastern antiquities, religious imagery, and psychedelic décor can be seen throughout the museum. 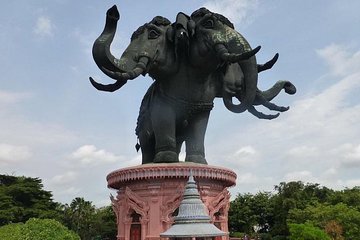 16. Vimanmek Mansion พระที่นั่งวิมานเมฆ - As the largest golden teak wood mansion in the world, it's very impressive. Vimanmek Mansion was constructed as a royal home in the early twentieth century. It was only used for a few years before falling out of favor and being forgotten until the early 1980s. Her Majesty the Queen unearthed it and turned it into a museum depicting Thai history during King Rama V's turbulent reign.

17. Khao San Road ถนนข้าวสาร - There are lots of things to do in this area, many of them revolving around parties and nightlife. Khao San Road is a crowded, boisterous, and enjoyable experience. Every traveler to Bangkok should go there at least once, even if it's only for a great night out. Khao San Road is a short street near Ratchadamnoen Avenue, a prominent thoroughfare that connects the neighborhood to Bangkok's old temples and palaces. Despite the fact that Khao San Road is a small street, its backpacker lifestyle of cheap guesthouses, bars, and eateries has spread to practically all of the nearby streets. 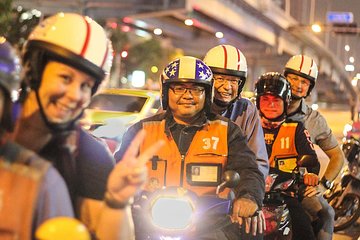 18. Silom and Patpong (สีลม) - Silom at night turns into a market with Patpong street, home to many go-go bars and fake goods. Patpong is one of the most well-known red-light districts in the world, and it is thought to be the birthplace of Thailand's go-go culture. It's even featured in great films such as The Deer Hunter (1978) and a James Bond chase sequence. Between Silom and Surawongse Roads, it has two parallel sidestreets with dozens of neon-lit strip bars presenting ‘naughty' shows and pole dancing.

19. Victory Monument อนุสาวรีย์ชัยสมรภูมิ - One of the transportation hubs of Bangkok and there's a lot of food, including the tasty boat noodle alley. The Victory Monument consists of an obelisk ringed by six statues representing the army, navy, air force, police and civilians. These statues commemorate casualties in the Franco-Thai War from November 1940 – January 1941.

20. Eat Durian กินทุเรียน - Durian, also known as the king of fruits, is creamy and sweet, and it's the best fruit in the world. Durian is a tree fruit primarily found across large swaths of Asia. There are around 30 individual species of Durio, and hundreds of varieties in just Thailand, Malaysia and Indonesia. The smell and taste of this unique fruit is something that people are divided about, so you have to try it for yourself.

21. Thai Street Food อาหารข้างทาง - Eating Thai street food is one of the most rewarding things to do in Bangkok, mainly because there's so much to try, and so many good flavors. Any food stall in Bangkok is simply a festival of colors, smells and tastes and this is something you shouldn't miss. Thailand has great food that is known around the world, but freshly made street food is on another level. 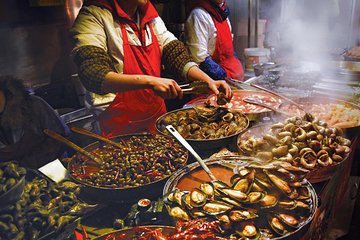 22. Thai Cooking Class เรียนทำอาหาร - A cooking class is a great way to learn some Thai recipes! Discover the rich flavors and fragrant spices of Thai cuisine during cooking class in Bangkok. Learn more about Thai culture and traditions as you shop for ingredients at the local market; get hands on making popular dishes like pad thai, green curry, or mango sticky rice; then sit down to enjoy a delicious homemade lunch or dinner. 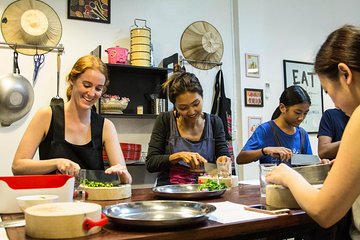 23. Phahurat พาหุรัด - Bangkok's little India is known as Phahurat. It's a place to shop for fabric and dine on delicious Indian food. It is the neighborhood surrounding Phahurat Road in Wang Burapha Phirom Subdistrict, Phra Nakhon District. You can have real feeling like you are in India, if you didn't have a chance to visit that incredible country.

24. Pak Khlong Talad ปากคลองตลาด - The largest flower market in Bangkok is a great place to see colorful and exotic flowers all day long. Flowers arrive from all around Thailand (and the world) at Bangkok's largest flower market before being delivered to hotels, restaurants, and other businesses. Everything from native jasmine to imported red roses can be found here. The market is open 24 hours a day, 7 days a week, with diverse atmospheres at different times of the day and night. The busiest time is probably between midnight and 4 a.m., when the day's batch of fresh flowers begins to arrive and the real trading action begins.

25. Yaowarat, Sampeng Market (เยาวราช, สำเพ็ง) - Yaowarat is one of the busiest and most exciting places in Bangkok - don't miss it! The market is located on Soi Wanit 1, a small alleyway running parallel to Chinatown’s main Yaowarat Road. The shops and stalls aren’t only restricted to this walkway, as there’s plenty more shops to be found in the surrounding alleys. You should dedicate a couple of hours to fully discover this area.

Hope you enjoyed these 25 amazing things to do in Bangkok! There are, of course, many more amazing places and experiences in Bangkok that we are going to explore in our future posts. Safe travels!

This post was originally published on our parent site - gotravelyourself.com 7 Tips for Better Cybersecurity During Travel

All forms of travelers, including business or pleasure seekers, are prone to computer security...
246 0
Read more

Travel to London: 10 places to visit

Each travel to London is more rewarding than the next. This cultural city center is packed with...
317 0
Read more

Utilizing your vacation days and taking a real vacation is critical for your mental and physical...
308 0
Read more

Do you really need travel insurance?

The short answer is: yes! Travel insurance should be integral part of your trip planning and...
548 0
Read more

Hello there! We have decided to provide service of travel related backlinks and guest posts to...
438 0
Read more

Future of travel after COVID-19

What is the future of travel after COVID-19? Since vaccination is an imminent reality and...
397 0
Read more

Since vaccines for COVID-19 are being rolled out and mass vaccination has started around the...
344 0
Read more